AHHHH beanie babies.  Now there’s something I haven’t thought about in quite some time.  What an ingenious idea.  Take some small little stuffed animals, fill them with beads, give them a name and personality, tell customers that they will be “worth something” and you have created the a fad that will get bigger than Kristie Alley’s dress size (before dancing w the stars 😉 ).  I swear to you, that the second you tell people that what they are purchasing is going to be “worth something” they are ALL over it…typical Americans, always want somethin for nothin!  Think about it.-People get those “state quarters” by the roll, and I can pretty much guarantee to you that none of those quarters are ever going to be worth more than 25 cents!  Anyways,  of course like every other 9 year old girl in the mid 1990’s I was all about the Beanie Babies.  The black and white cat in the picture there was my first one.  His name was “Zip”, and he sure was something.

Then, just as the beanie fad starting winding down, something amazing

happened.  McDonald’s started giving away Beanie Baby Minis in Happy Meals.  Now, if the regular sized Beanies weren’t worth anything, the smaller versions were obviously going to be worth millions one day.  I mean seriously, I know people that would go through McDonald’s and get 20 Happy Meals just so they could have the Beanies, and even go as far as keep them in the plastic packaging they came in, in order to keep them in mint condition of course.  Although even as a kid, I was not a fast food fan, even I begged my mother to take me to MickyD’s so I could enhance my Beanie Baby collection appropriately.

I know that even today there are still a lot of crazys out there that are waiting for the value on these toys to rise, but I think most of the modern world has come to terms with the fact that, like most collections that  Americans have invested in, the collection becomes valuable only if the item is hard to find or if the product actually has some kind of value, which these clearly do not.  I will admit that I do have one Beanie Baby still –

“Erin” the Irish bear, which I keep because its my  name, and I recent purchased “Sid” the sloth from the movie Ice Age for my boyfriend because I think they look alike-could be twins.  But other than that, as we all know, all good things must come to an end…Zip and the boys and all their miniature brothers and sister have long ago kicked the curb.  From time to time, I see Beanie babies in the grocery store or a gift shop and think to myself, “who buys these things anymore!!”, and even though I walk by them without a thought, which i never would have done 15 years ago, it brings me back to a simpler time.

oh hi…i didnt see you there…

Have you ever run into someone you know and they just ignore you?  This has happened to me before, and I’ve gotta say its probably one of the most annoying things ever.  This particular time, I was in a local store and I saw someone who I used to be really good friends with, but had drifted apart, and he completely ignored me!  Now, even I can admit that I wasn’t thrilled about the inevitable interaction, but that being said, I wasn’t going to just outwardly ignore it either!  I walked in, and we were both looking up, straight ahead, right at each other…therefore, we made eye contact….EYE CONTACT.  Once the initial E.C. is made, the fake conversation is theoretically locked in.  So at that point, I figured we’d just get it over with…so I started walking his way, and then I noticed what was happening…he was focusing intently on the ground….umm are you kidding me??  Obviously I noticed this, which made me want to call him out on his rookie mistake.  So,  I went straight up to him and said something, and when I did, the most irritating thing came out of his mouth.  He pulled the “Oh, Hey!! I didn’t even see you there, how are you?” Wow, at least be a man and admit that you were completely trying to avoid me!  I cannot even believe that he would try to play that card.  Well anyways, the moral of the story is that if you are trying to avoid someone, what you really need to do is ACTUALLY avoid them.  Hide behind something, wear a mask, heck, run away if you have to!!  But, if you make eye contact, just surrender to the situation because you aren’t fooling anyone but yourself, and ultimately you are just making yourself look like an asshole. 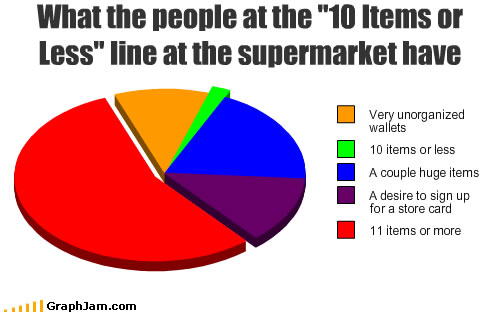 Animals with a sense of humor

Having trouble potty training your kid? Why waste time sitting on the edge of the tub waiting for them to take a leak, or even worse having them pee into one of those nasty training pottys that you have to empty…you have a kid…not a cat, remember?? Just get one of these little happy devices, strap your kid in and wait for the magic to happpen. Since they are completely secured to the top of the can, you are able to leave and go about your daily life and tell them not to bother you again until their business is done. 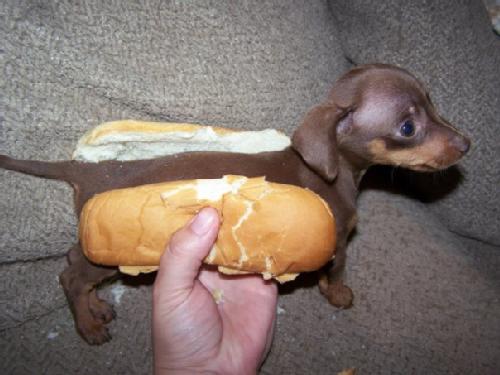 Ever hear that statement “don’t cry over spilled milk”?  Well normally I would agree to this…you’re pouring a bowl of cereal and you spill some, or you reach across the dinner table and knock your cup over…not a big deal.  But I think there are some cases when crying over spilled milk would actually be appropriate.  Say you’re carrying a crate of milk and drop the whole thing on your foot and the bust open…ok well I guess in that case you’d be crying more over the fact that your foot is throbbing and not over the spilled milk.  But take this scenario into consideration…You’re a truck driver for Hood and you’re driving down the highway and get into a terrible accident where your truck topples over…now you have milk spewing from your trailer.  I’d say in this scenario with hundreds of gallons of milk streaming over the road, it would in fact be appropriate to cry over spilled milk. 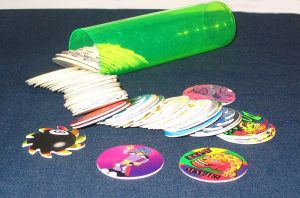 I remember thinking (for some reason)  that they were SO cool.  I remember saving up my allowance to get them, and looking back I can’t for the life of me figure out why.  They are seriously one of the dumbest kid toy crazes I can remember…right up wither with “gak”…I mean seriously that crap really has no point at all.  I specifically remember getting this sick slammer…it was pretty heavy and black with a silver skull and cross bone on it.

Then I remember one year I got a “pog maker” for Christmas so I could make my own pogs with drawings, pictures or clippings from magazines on them, so I guess you could say that was pretty awesome.  For a while I was collecting them…I probably had hundreds, and figured that it was probably a good idea to hold on to them because they would probably be worth something someday…plus it was always good to have a lot (even if they were duplicates) because you could trade them with other people in order to “enhance” your collection.  The trading could get intense at times because you had to denote  a value for your pog…sometimes you could do an even trade, 1 for 1, but other times if you had a really good one, it could be worth 2-3 just ok ones.  And if you were trying to trade a pog for a slammer forget about it…that could really cost you. Anyways, like any other fad, this early 90s game kicked the bucket rather quickly but every now and again I think of it and to this day it still makes me smile.