Top 10 Reasons its a BRILLIANT idea to be SINLGE this Christmas!

Christmas is finally here and now being single for the first time at the holidays in almost a decade I have been pondering how freaking WONDERFUL it is.  No seriously!  For years I’ve felt bad for the singletons who have no one to spend time with during the holiday season, but as it turns out, I was completely wrong about this.  This comes as an extra shock because I’m almost never wrong.  Here’s my top ten list of why its a brilliant idea to be single this holiday season:

Posted in Happy Holidays!, This is Me!

Though I technically made this trip at the end of December, since it was within 2 weeks of January 1, I’m going to count this as a winery on my 2013 Bucket List!  Kate and I decided to spend our Sunday down in Wallingford, CT at the two wineries there.  It was an amazing day!  Since it was a very cold and rainy day there wasn’t much else to do anyways except complain about how cold and rainy it was, so it was really the perfect way to spend out sunday.  We went to two vineyards:  Gouveia and Paradise Hills.  Each of them had their own separate strengths and weaknesses, but both were really fun!  Here’s my breakdown:

Cost of Tasting:  $5 (this includes 5 pre-seleceted wines only)

This was the first stop on our Sunday wine tour.  This was actually my first time ever going to this specific vineyard and upon arrival I was pleased!  You walk in, and the atmosphere is incredible.  That is really the only reason I gave them a 5.5.  It was very small, which was nice.  On one side there was a couple of large tables, and on the other was a few small tables surrounding a cozy wood-burning stove.  The tasting itself was very informative!  Rich Ruggierio, one of the family members at this family owned and operated vineyard was our wine connoisseur and besides being incredible nice, he was also extremely knowledgeable.   We tried 5 wines, 3 whites and 2 reds.  Though none of the wines really stuck out to us as amazing, but we ended up getting a bottle of the Washington Trail White Wine anyways and having a glass there while we chatted by the fire.  Since this vineyard is so small, I assume the only reason they have such long winter hours is because they wanted to hold the same hours as Gouveia, which is only about a mile away.  It was really fun, but we were ready to get out of there and move on to Gouveia, where we knew the wine would be delicious. 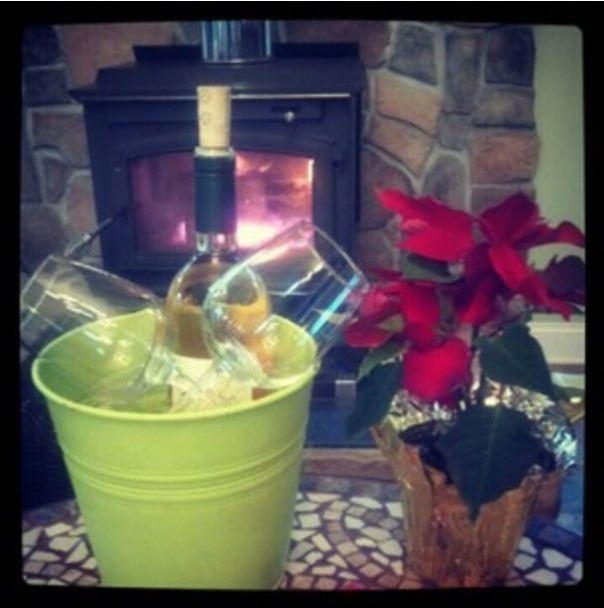 Nothing like some cold wine, and a hot fire!!

Cost of Tasting:  $8 (this includes 4 pre-seleceted wines and one of your own choice.  It also includes an etched keepsake glass to bring home with you.)

This vineyard is one that people typically enjoy because it’s set atop a huge hill and gives gorgeous views.  I have been there twice and the first time I was in LOVE, but that was probably because it was in the middle of summer and I could sit outside and watch the sun set over the horizon.  Today, however, since its late December, very cold, not to mention raining, was different.  We were cooped up inside.  Now, don’t get me wrong, the inside of Gouveia is absolutely gorgeous.  There is 30 foot ceilings, a couple of fire places, exposed wood interior, tons of tables, and even some cute games on top of wine barrels.  But, I felt that the atmosphere was almost too loud.  Because its so big inside, and the tables are so long, many people use it almost as a party spot.  To me, wine tasting is a bit more intimate and I personally prefer to go with a small group of people so that we can sit and chat after our tasting.  Gouveia had so much going on that it was very loud inside.  I did, however, LOVE that there was games!  I love games and after about a half hour of begging I was finally able to get my sister to join in on a game of checkers…After I won and she didn’t even jump one of my men, I realized why she didn’t want to play! haha. 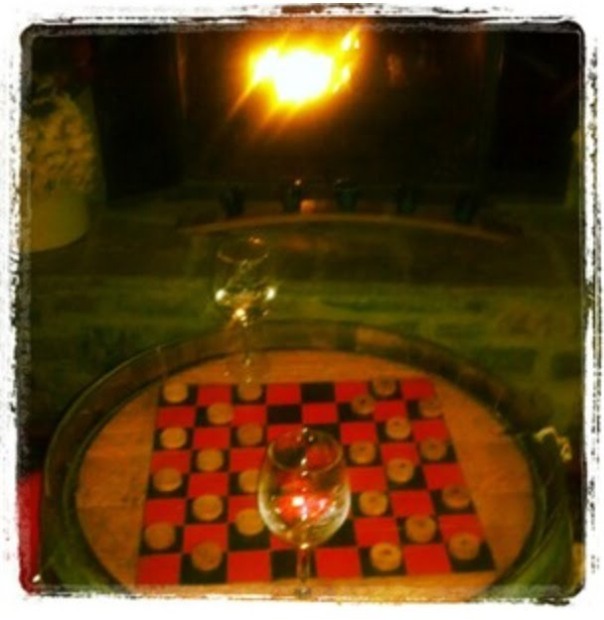 Our awesome checker board next to one of the fire places!

The wine at this vineyard was really good.  We ended up buying a bottle of the Cayuga White, pic below, and had a glass there before heading home for our private “pizza party” haha. 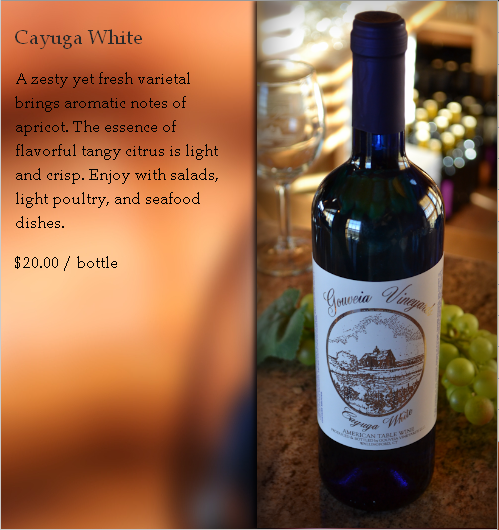 This bottle was totally worth the $20! We had a glass at the vineyard, and then some more later with dinner! YUM!

These vineyards are literally 1 mile and 3 streets from each other, so if you aren’t from the immediate area, I definitely recommend knocking them both out in one shot if you’re trying to fill out your passport!  Both vineyards were fun, and now I can honestly say that I have found something that I truly like to do in the summer!  Yay!

What the Hell is Elf on a Shelf 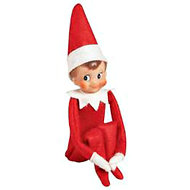 Am I the only one that doesn’t get the point of this whole “elf on a shelf”  thing?  I’ve only become familiar with it in the past year and even at that I’m not sure I really get it.  So from what I understand, you hide this little bugger and the kids go wild over finding it.  Why would they want to find it!?  It looks like a creepy relic of 1950.  I’m not so sure about this one…

Normally every year I send out between 75 and 100 Christmas cards to my nearest and dearest.  I usually get them out within a week of Thanksgiving, which is nice because it also helps get me the get best “return rate”.  This year I’m not much in the holiday spirit and haven’t gotten around to sending any Christmas cards at all except for one that I sent to my best friend.  I know I should probably get my act together and at least send them out to my family members, but at this point I’m not sure if that’s going to happen.  Plus it has helped me perform a social experiment that I was pretty confident I knew the answer to already, however this has really solidified my hypothesis.  Instead of sending cards this year, I’m going to give an awesome post on the best and worst practices of the holiday card card distribution:

Posted in This is Me!

A Day In The Life of Being on “The Naughty List”

Hello all and Happy Holidays!  I’ve been a HORRIBLE blogger lately, and by “horrible”, what I really mean, is non-existent.  So, what I’m going to do is dive right back in with a bang.  I’m going to back it up to 2008 and tell the story of the year I was on the Naughty List.  At the time I was fresh out of college, but still working at the restaurant I had worked at throughout college a couple nights a week.  A couple of my co-workers who were roommates decided to have a “Naughty or Nice” Christmas Party.  Now, given the fact that we all were between 18 – 25 and a good looking bunch, if I do say so myself, and course I do, I figured people would go the “naughty” route.  I guess I was still in the college mind set because whenever my fraternity had themed parties the “cowboy/Indian” party turned into “sexy cowboys/slutty Indians” party, and the “Laua” became “wear-a-cocoanut-bra-in-the-middle-of-February-party”…you get the idea.

Anyways, while out browsing for an awesome outfit for the party, I found a baseball tee with red arms and white body that said “team naughty” on it and it came with a pair of red and white striped boy shorts underwear and baseball socks.  Obviously this was intended for pajamas, but I also decided that with my black Uggs and Santa hat it would be the PERFECT ensemble for the night to come.  So at this point I’m pretty pumped for the party and I’m feeling pretty confident about my outfit.  I guess you can say I figured I’d fit right in.

I get to the party a bit late, as it was snowing and the roads were pretty slick, and I walk in with my black pea coat buttoned up to the top.  I walk through the door and look around.  Holy. Shit.  That’s seriously what I said, both out loud and in my head.  I’m pretty sure I said it in my head about 400 more times than I said out loud, but that’s not the point.  As I looked around I noticed the other 20 or so guests that were already at the party were dressed “nice”.  No, not just “nice”, I mean nice.  Every person in the room had on a nice dress, pearls, or a sweater vest.  I’m pretty sure there was even some bow ties mixed in, and here I am in my freaking underpants…W.T.F.??  Erica and Jon, the hosts, came over to me and offered to take my coat, as any good host would.  I immediately said “I can’t take my jacket off”.  They asked why, and I discreetly opened my jacket to show them what I was wearing.  No, let me rephrase that,  I showed them what I wasn’t wearing.  I proceeded to go into Erica’s room with her while she tried to convince me stay as I, almost in tears mind you, was trying to tell her I had to go home because there’s no way I could face this crowd dressed as a naughty elf.  At this point, Jon (my savior) came into the room with a tray of shots…after a shot (or 5) I decided that my outfit was actually completely appropriate for this party and made my way out to the crowd.

Though at the time it was probably the most mortifying moment of my life, today this story goes a long way.  I’m not sure I know of anyone else who who is stupid enough to get themselves into this mess…but even if I did meet someone on my level, I don’t know that they would shamelessly strut around that way all night.  In the end, this is obvious proof that though people say “alcohol isn’t the solution”, there are actually some cases where it is…this, my friends, is one of them! 😉

Posted in Hilarious, Random Experiences, Ridiculous People, This is Me!

Silence and Support for Sandy Hook 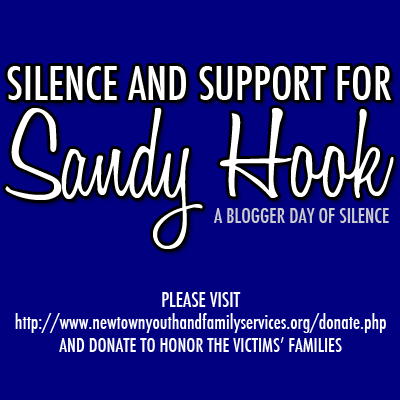