That is NOT My Northface 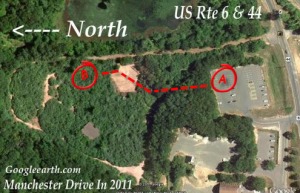 While we are talking about how great high school was, I want to bring up a fun party spot we used to dominate.  Back in the day (you know, like 8 – 10 years ago when I was in high school) We used to party it up big time down at the pits.  “The Pits” was this outdoor party spot that was used as a go to if we couldn’t meet up at anyone’s house.  It was really where they used to have an old drive in movie theater built in the 1950s on the Manchester/Bolton  line on route 6. There is little remnence of this besides the screen’s skeleton, which still stands.  Now, it’s nothing more than sand dunes with heavy tree cover.  Anyways, we used to go down there all the time and park in the commuter lot then hike through the pitch black woods to where we would build bon fires.  Hey, we live in CT – parties in the woods are NOT uncommon!

The Pits was a great party spot because it was basically open to all.  You never knew “which group” would be down there at any given time, and many times there was intermingling among a few different cliques, which was fun.  I will never, EVER, forget the time one of our friends, Jesse, “punked” another one of our friends, Liz.  Jesse and Liz had been friends for the majority of their lives, but had this antic been for real, that may have changed.  We were all hanging out, and Jesse threw a black jacket into the fire.  Liz, seeing the black jacket, assumed it was here’s and almost immediately flipped out.

“That is NOT my black Northface,” Liz said.  The rest of us (about  20 people) quickly quieted down and looked, but no one said anything.

“That is NOT my Northface” Liz repeated…still no one spoke up – to be honest, I think everyone DID think it was her Northface, and in our heads we were all making up escape routes…Liz seemed pretty pissed, and while normally she was a kind hearted and fun person to be around, I think we all knew that if we pissed her off enough she could probably ‘take’ any of us.  No really, she once punched a girl in the face so hard that all 5 of her acrillic nails popped off…

A third time Liz spoke up, “That is NOT my f*cking Northface”.  I was scared, and I’m sure I wasn’t alone there.

It was just then that Jesse came out from behind a tree with Liz’s actual Northface screaming “YOU GOT PUNKED!!”  Everyone started laughing and was relieved that no one had to run away. 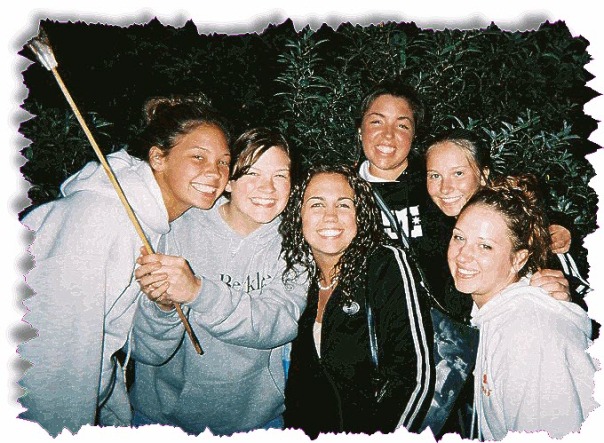 I’m not sure if this is a “you had to be there” story or not, but for me, it’s a memory that I’ll never forget, and will always bring a smile to my face!

Posted in Manchester Love, Mother Nature, Random Experiences, This is Me!, Travel, Young and Hopeless...

So….This one time….in the good ole days, me and my BFF wanted to drink a little bit, but we werent quite old enough to do this in the open.  The two of us were trying to figure out what to do with out night, meanwhile, my younger sister had a group of friends hanging out in the living room.  Instead of hiding it, like we normally would, we came up with this BRILLIANT plan to go “blend in” with my sister’s group of friends.  This was our first mistake.  Oh, and when I say drink a little, I mean we took 2 pint glasses and split a bottle of red wine between the two and decided that we could pawn it off as “fruit punch”.

Anyways, so my moms comes down and sees us two hanging out with my sister’s friends and immediatly knows we are up to no good.  So here we are “acting casual” and she she asks me whats in the glass. “Juice” I tell her…she furthers her question, asking what kind of juice… “Fruit Punch” I immediatly reply.  She calls my bluff, smells it, tells me its not fruit punch, but I’m sticking to my guns with this one…she then proceeds to taste my bev, and confirms to me that it is NOT juice…and still I tell her it is.  Not my most shining moment.  Needless to say, she made us BOTH dump the “juice” and our brilliant plan shot right down the drain with our bottle of wine. 😦

Posted in Young and Hopeless...

This has always been a somewhat challenging activity for me…it’s not something that seems difficult on the surface, especially when you see a group of “old people” doing it with little to no problems.  Step up, Step down…what is so hard about that?  My Step Class adventures started 7 years ago when I was a senior in high school.  My friend Stef and I decided it would be a good idea to get motivated and go to an early morning Step Class at our gym before school.  So there we were.  5:30AM  “Advanced Step”.  The instructor came up to us and asked if we had any “stepping experience”.  We didn’t, and I think I may have even laughed at this inquiry.  I had been climbing stairs since I was a kid, so this class didn’t seem like a big deal, seeing as how I considered myself a generally energetic and athletic person.  Anyways, we were the only people in the room of 25 under the age of 80, so we pretty much thought this was going to be a joke.  It was.  Only, unfortunately, the joke was on us (me in particular).  I was about 45 seconds into the class when I realized I was really up shit’s creek.  By the end of the class, not only was I embarrassed by my lack of coordination and absence of skill in this department, but I was physically exhausted from trying to keep up and mentally exhausted from trying to keep myself together.  It was that day that I vowed to steer clear of this stepping society for a long time.

I held strong with this vow for a long time.  I since left that gym and have been through 2 others as I promised myself, I did not so much as use a stair master, let alone go to step class.  Recently I joined a new gym and decided to try my hand at Step once more.  I get to class…8:30AM on a Saturday morning “Turbo Step”.  Again, the instructor asks me if I’ve ever done step before, and of course this time I confidently tell her I have.  This class seems to be way better right from the start.  It’s a younger crowd, not to mention the fact that I now have experience.  The music comes on and almost immediately I start having flashbacks.  These people are literally stepping all over me and there were a few moments that I actually thought I would die. The only thing more embarrassing than up and leaving the class early was staying, but I knew I had to and I was hanging on to the hope that I would catch on.  The worst part was that I think people actually felt bad for me.  They just kept trying to “show me”, as though I was just going to magically comprehend all these acrobatic moves.  That was certainly one of the most miserable 45 minutes of my life.  Moral of the story?  If at first you don’t succeed, if you are in step class and you don’t want to injure yourself or an innocent bystander, just let it go and hop on a stationary bike where little to no damage can be done.

Posted in Young and Hopeless...