Needless to say, by the time we were eating lunch, the only thing I could think about is the fact that there is no way I could live my life another day without something cute to play with at my own house.  So, I took the necessary measures and $14 and 2 hours later, meet Paul McNibbler.

Immediately after Paul got home, I knew he was the perfect fit.  First off, we have a lot of the same hobbies.

Paul, like me, loves chips. It’s literally his most favorite snack.  He tries to save some for later (don’t we all) by putting them in his food bowl when he’s done, but that never lasts long.  You know what they say – once you pop, the fun don’t stop.  And once he’s done snacking he licks his teeny tiny little fingers.  I. die. everytime.  We’re (me and Paul, that is) trying to lay off the chips, though, because he’s really started to pack on the grams and I’m starting to get concerned about him fitting through his tunnels. 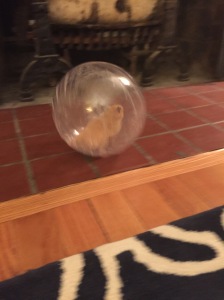 Watch out. Marathoner in training.

He also loves running.  In fact, his pure athleticism has inspired me to lace up my old kicks and get back out there.  My fear, however, is that the combination of his constant carbo-loading and cardio-training has not only increased his curiosity about my homes’ nooks and crannies – specifically the nook of the couch and the cranny of everything inside the couch – but is also giving him olympic-level training.

Sweet Paul has already escaped TWICE. I will admit that the first time he got loose there is a possibility that it may have been because I left his cage open (jury is still out on that one), but this last time…it was really a doozy. Paul escaped sometime after 10PM on Friday from a cage that looked completely closed.  By the time I realized his absence it was Saturday morning and I knew I wouldn’t be able to find him until Sunday because he doesnt normally get up until 8PM and I would be out at a concert by then (priorities).  When i got home from the concert I put his cage on the floor and opened the door and put a chip (what else!?) in there.  I guess I just figured that after a while he’d want to go home, and once he was home and saw his favorite treat he’d want to snack on it in bed with his eyes closed like I do and then go right to sleep…i mean….he’d have the decency to just stay there.  I was wrong.  Sunday morning comes and the chip is gone; unfortunately, still is the hamster. What a little rascal.  So now I know this rodent is just playing me…but at least I now know he’s still kickin around somewhere.

Later in the day I’m watching TV when I hear something – yep, it was Paul…inside my couch. So I do what anyone would do, I flip the couch over and rip the lining of the bottom of the couch – perfectly logical. perfectly efficient.  After all, I have been without Paul now for approximately 36 hours, which in hamster time is about 3 months – let’s be realistic people, he’s not going to live forever and I need to make sure I am able to spend the best years of his life w him.  I got my wits about me and did the only thing i knew how – bribe him with food.  1 cheese-it and 2 lightly salted lays later (He was so cute for the first cheese-it and chip that I couldn’t get it together quick enough to capture him) I was able to lure him out of the depths of my sofa.  I gave him a long talking to about how misbehaved he was and let him know that next time his punishment wouldn’t be so lenient.

Me with my Sweet Boy Paul

There’s so many more adventures to share with you, but not today.  Today I’m exhausted.  No one ever told me how hard this parenting gig really got.

Stay tuned for more adventures with Paul and other random thoughts. 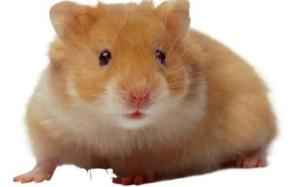 Over the past couple months I’ve been throwing the idea of getting a pet around.  I think I’m mature enough for this added responsibility and I finally landed on the perfect pet for me:  Paul.  Paul McNibbler, the hamster.  You see, I had a hamster once, Nibbles, who lived a long and happy life.  He had a number of hobbies:  nibbling his way out of his cage, filling his cheeks with 3 weeks’ worth of food, and of course getting loose in moving cars.  Anyways, I figured that Paul would be the ideal pet for me because it would really fit right into my lifestyle.  Being a solitary animal, I could leave him alone for hours, or day if needed, I could fit him just about anywhere, and best of all, he’s got an expiration date.  I’m 27 now, but by the time I’m 30, ready to buy a house and (god willing) have a family, I’ll be pet free.  BOOM. DONE. 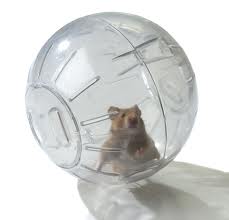 Paul making his rounds during a typical Casual Friday.

Oh, and the best part:  Casual Fridays With Paul.  CFWP is something that my team at work decided would probably be a great idea where Paul could come into the office on Fridays, dressed to the 9’s of course, and make his ‘rounds’ in his hamster ball.  You know, just ‘roll through’ to make sure everything is running smoothly.  Oh, and of course he would bring some office cheer.  Most likely, he would spice up the Friday afternoons when he unavoidably would get loose the office and we all would be on a rampant hamster hunt.

Anyways, I moved recently and have kind of backed away from the thought of any new responsibilities, which is ironic because I feel like it was as soon as I gave up on this dream, it just came true without me even trying. (Never give up on your dreams, kids!)  There was I sitting in my living room, watching the Wonder Years, and enjoying a pizza, when a baby opossum pops up in the middle of my living room.  WHAT?  SERIOUSLY?  Yes, this is serious, as serious as a heart attack, which, by the way, I almost had. 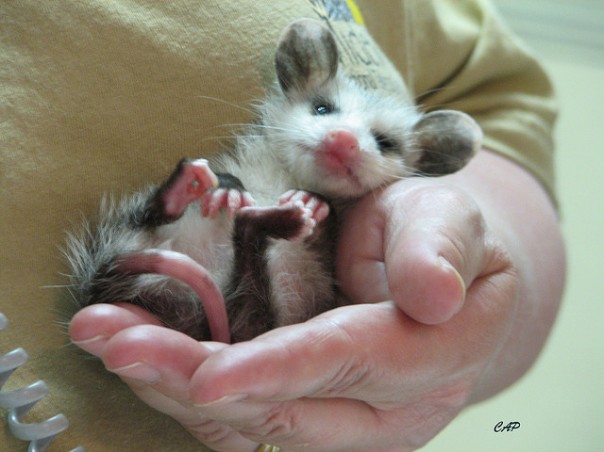 please note that this is not actually the opossum in my apartment, but he did look just like this little nugget

I called my land lord, who set up an appointment with animal control, and ran upstairs to my neighbor, who I have known for approximately 5 minutes and probably thinks I’m crazy to come down and assist in the situation.  Lucky for me, he was nice enough to come down and help me out with the situation.  Between the two of (and by “between the two of us” I mean my neighbor was on the front line in the living room, while I nervously stood behind the barrier in the kitchen) we were able to get the cutesy baby opossum out the door.

The little guy didn’t even get out the door and I already missed him.  A new paul was sitting there, given to me for free, and what do I do? I shoo him out the door.  What kind of a pet-mother am I?  I have thrown away the hopes of having a rodent-pet, I have thrown away the hope for Casual Fridays With Paul, and I have destroyed my confidence in myself as far as pet-owning goes.

As an aside:  no animals were hurt in the making of this story.  Paul was able to make it out alive, where he will be reunited with the rest of his opossum family, and after a thorough investigation of my apartment and the grounds around by the animal control guys, there were no more baby or mommy opossums found.

Please stay tuned for a follow up story about all the lesser known facts about opossums – they are actually a lot more interesting than you may have thought.

Posted in This is Me!